skip to main | skip to sidebar

So back in January I turned 30 and while I was pretty proud that I didn't have some kind of meltdown, I realized that it was about time for me to put up or shut up. All year it's been a bit of a struggle to find out what that actually meant, though. A couple jobs, half a year of being unemployed and so many internal struggles later, I realize I have got some serious problems. One of which is that I like drugs. Not all drugs, I can't put anything in my nose or mess with needles. Ha ha. I cross stitch but I'm still afraid of needles. I'm a bigger sissy then those kids at the playground thought said I was last night.


In all honesty (ok, in kinda honesty) I have been thinking of doing a set of motivational poster-type samplers where I put one of my favorite drug names in bigger letters and something describing it underneath. What do I mean? You can't visualize it? Visualize this:

I thought it was funny that I use song lyrics and titles as my blog posts or inspiration a lot, but it wasn't until all around good person doaflip mentioned over on flickr that "The Kids Are Alright" is, in fact, the name of a very good song by The Offspring. I knew I was familiar with the term already, it's just not where I was going with it in my head...it just worked out that way.


I am giving some thought to doing a second "Valium" piece, the new one redesigned to fit into the plans I have for this series, but for now I hope to post a new piece every week or so. What are you so excited about, only the first one is free...
Posted by Whatever James at 5:41 AM No comments:

Labels: crafts, cross stitch, dont do drugs...unless they're good, live from the pharmacy, my medicine cabinet to yours, vicodin, whatever james

I know posting a picture of a recently completed or work-in-progress is not mandatory (I skipped my senior year at blogging school so what do I know). I also know you don’t come here for the instant coffee and penny candies I leave out. So rather then post another picture of “Hell” or busting my hump on yet another sampler or small piece, I thought, being in California, I would take a furlough (see how I did that) from stitching and tell you about someone else’s work. Without further adieu (about something), let me introduce daisymae_cs:

Read more »
Posted by Whatever James at 4:41 PM No comments:

Labels: art, crafts, cross stitch, daisymae_cs, give me a triple shot of awesome, i guess it's NOT all about me, inspired, inspiring, whatever james

How Could A Little Inspiration Be Any Worse?

I mentioned in my last post some of the more personal stuff I have been dealing with lately and I have to admit I was feeling a bit disconnected from stitching as a whole. Partly as a joke, and partly trying to find, well, anything, I posted a request to the Facebook Fan Page. I just wanted to see what anyone else is working on and I don't know anyone local, I don't communicate with many people directly by email, so that left Facebook. Since I was not working on anything at the time it seemed like I could live through somebody's hard work, just not mine.

While the rest of you were busy counting stitches there was one response from facebook like-er(?) Carrie. She showed off her current piece which she is working on as a gift. But she said I could post a picture of it. Soooo...whoever is getting this likes Lady GaGa but doesn't read this blog? Really, Carrie, who are you associating with? Honestly though, I looked it up online and your piece is looking bad-ass! So everyone who likes Lady GaGa, has a friend named Carrie and is hoping this is for you, close your eyes. 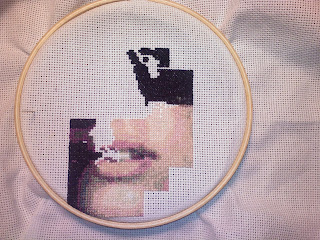 Now, everything I know about Lady GaGa comes from the above picture and the songs my five-year-old sings me. But it seems to be exactly what I needed because I have since resumed work on my album cover project I started so long ago and kind of fell to the wayside.

So what was it? Someone working on something that reminded me of my work in progress? The neat blog/free charts/free char generator she turned me onto? Her overwhelming awesome? Probably a little of everything. What matters is the skyline is almost done and I can move down! 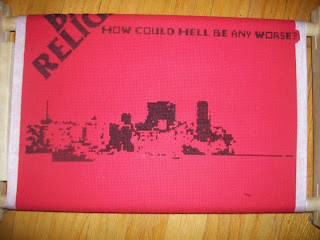 Now anyone who has been reading this blog since Monday when they got in line for the new Harry Potter flick can tell you I have been hitting the samplers pretty hard. And there is more to come! In the meantime go over to the Facebook Fan Page and talk or post pics of your big project, finished or in progress. As far as what I mean when I say big is I am hung like a tuna can whatever is big to you. Time, stitch count or final size (it matters, they're telling me). I'll be here all week, folks.
Posted by Whatever James at 5:30 PM 1 comment:

Labels: bad religion, crafts, cross stitch, how could hell be any worse?, I never thought Lady GaGa would be a tag on this blog, Lady GaGa, regift it to me, whatever james

I'm Going To Hell For This One!

It’s been a long couple of months. I lost a really great job for a really lame reason and I got really depressed. I’m working again (temp style), a major pay cut, and not really cutting it all the way around. I tried to rally around some great stuff: the contest here, the facebook fan page, etc. but overall I kind of found some disconnect from stitching for almost two months. I missed three podcasts, tons of amazing projects by other folks and a lot of down time on my own every night.

What happened? I’ll get into that in another post. What matters is that I decided to revisit an unfinished project, plus realize flaws and all, I am who I am. Sometimes I wish I weren’t. So where do I start? At the top. According to a predominant religion up is where the home is. So in sampler form, here is my take on the title of one of the songs from the most recent NOFX album: 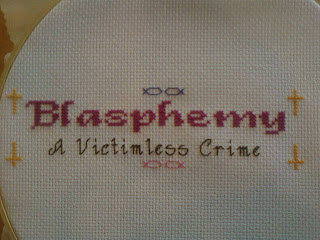 I am still slightly debating more kissing same-sex fish but I think this is pretty much done. I thought the upside down crosses would be a bit much in all four corners and thought that it came off a bit more…playful that they were up and down. This was kind of fun to do as a public piece over about two and a half hours at the coffee house nearest the largest church in our city. This was the first time no one talked to me about stitching. Co-inkie-dink?

Moving on. I’m having a lot of fun. Getting a lot of stitches done and can’t wait to share more with you. Also I have met some really awesome people and I want to tell you about them. But that’s later. Until then…

Posted by Whatever James at 5:18 AM No comments:

Who The F*ck Is This?